Mark Steffe is the President/CEO of First Command Financial Services, Inc. which provides personal financial coaching to about 290,000 client families around the world. Mark is responsible for guiding the organization in its efforts to make lifelong financial security possible for all military families. First Command accomplishes this by creating lasting bonds with clients through face-to-face coaching and empowering them to develop positive financial behaviors for every stage of their lives. First Command is headquartered in Fort Worth, Texas, and has more than 175 offices worldwide. First Command, through its subsidiaries, maintains more than $35 billion in managed accounts and mutual funds and has more than $62 billion in life insurance coverage in force, while First Command Bank holds more than $960 million in deposits.

Mark joined First Command as a Senior Vice President and Chief of Staff of Advisor Operations in 2010 and has since played an integral role in evolving the client experience in a digital world. At the same time, he has protected the integrity of the face-to-face coaching that is central to the First Command philosophy. Throughout his subsequent roles as Senior Vice President and Director of Advisor Operations for the Midwest Division and Executive Vice President and National Director of Advisor Operations, Mark helped build strong, collaborative relationships between Advisors and the Home Office. This has been crucial in enabling Advisors to help clients pursue their financial goals more effectively and efficiently. His accomplishments and demonstrated leadership ability led to his promotion to President in 2017 and expanded COO responsibility in 2018.

In January 2020, Mark was appointed as the first CEO in First Command’s history without military service experience. His selection was the result of an ethos of service to the military gained during more than a decade immersed in First Command’s culture, a deep understanding of the challenges faced by our Nation’s military families, and in recognition of the demonstrated leadership skills required to guide the organization in its efforts to make lifelong financial security possible for all military families. On day 70 in his new role, Mark was confronted with a once-in-a-generation crisis as a global pandemic was declared. Under his leadership, First Command rapidly adjusted its operations to continue to help military families pursue financial security amidst a volatile economic landscape in which in-person face-to-face coaching was no longer possible. At the same time, at Mark’s direction, First Command immediately made financial relief programs available to clients to bolster their financial outlook during the crisis.

To ensure that First Command continually adapts to the needs of military families, Mark and his team regularly meet with clients to seek out their perspectives. During his tenure at First Command, Mark has visited more than 50 military installations in 23 U.S. states and three countries. This personal outreach is supplemented by the First Command Financial Behaviors Index®, a monthly survey that assesses the financial behaviors, intentions and attitudes of career military families. Mark also consults regularly with First Command’s Military Advisory Board, a select group of retired senior flag officers and senior enlisted leaders from the Nation’s military services. The 10-member board provides Mark and First Command with an independent perspective on issues relevant to First Command’s work, as well as advice on how to best serve the interests of military clients.

In his role as President/CEO, Mark has spearheaded inclusion initiatives for First Command. Under his leadership, First Command is striving to create a more inclusive culture in which all employees and Advisors feel trusted, valued and empowered. For Mark, advancing equality is not just the right thing to do from a business perspective, but a personal imperative born from a desire for everyone to have the same opportunities he has had in his career. In service of this goal, Mark committed to the CEO ACT!ON pledge for diversity and inclusion in 2020. He also championed the hire of the company’s first Diversity & Inclusion Director. In recognition of Mark’s leadership during the pandemic and on issues of diversity and inclusion, he was nominated as one of the Dallas Business Journal’s Most Inspiring Business Leaders of 2020. Mark was also recognized in 2020 as a member of the Fort Worth 400, an annual list by Fort Worth Inc. magazine of influential community leaders.

Mark actively supports several charitable endeavors, including the annual Spirit of Giving campaign by United Way of Tarrant County and the First Command Educational Foundation (FCEF). United Way of Tarrant County is a local charity focused on providing leadership and harnessing resources to solve persistent social challenges, while FCEF is a nonprofit organization dedicated to empowering those who serve our Nation by improving their financial literacy. FCEF accomplishes this goal by offering approximately $130,000 in annual scholarships and financial education to America’s military servicemembers, civilian federal employees and their families. In addition to his philanthropic pursuits, Mark is active in LeaderPrime, which fosters connections among Fort Worth business leaders new to the city or to their roles.

Mark graduated with high honors from the University of Illinois, earning a Bachelor of Science degree in Finance. He holds Series 7, 8, 23, 63 and 65 securities registrations, plus life and health insurance licenses. He completed the Harvard University Advanced Management Program in 2015.

He lives in Fort Worth, Texas along with his wife and five children. On any given day off, you can find him attending one of his children’s sports games or cooking family dinners.

Family is the thing here, as is the focus on the financial wellness of veterans. If you’re an employee, your family, at company expense, goes to the annual advisor conference. Hawaii anyone? 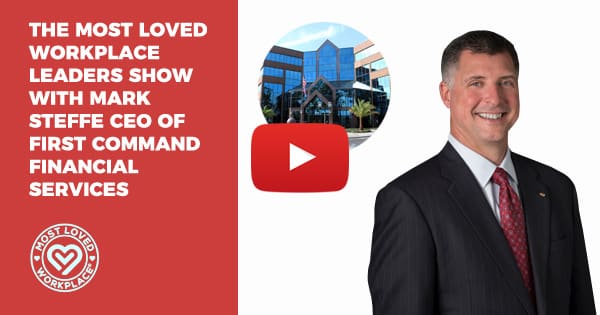 making decisions that are aligned with our values, the best interests of the people in the business and his own focus on family and work/life balance. During the pandemic, employee safety has been the basis for all decisions. He models support and caring for the First Command family.

Louis Carter is the founder and CEO of Best Practice Institute, Most Loved Workplace, and Results-Based Culture. Author of In Great Company, Change Champions Field Guide, and Best Practices in Talent Management, as well as a series of Leadership Development books. He is a trusted strategic advisor and coach to CEOs, CHROs, and leaders of mid-sized to F500 companies – enabling change and steering employer brand development together with highly effective teams, leaders, and organizations as a whole.

Would You Like to Learn How to Become a Newsweek Top 100 Most Loved Workplace®?

Simply fill out your details below.

Would You Like to Learn How to Become a Most Loved Workplace® ?

Join a movement of companies who consciously place love for their employees at the center of their business model.